As the Vietnam attractions in King Kong 2 are scenic and untouched, the film crew have committed to respecting the natural environment in any place that they come to film. Hopefully, the Kong 2 will hit the theater in 2017, and Vietnam is said to cover around 10% of the film’s entire expense. While Hollywood appreciates Vietnam’s picturesque and pure attractiveness, Vietnam takes Hollywood’s appreciation as the valuable chance to promote her tourism internationally.

Ninh Binh and the King Kong 2

Ninh Binh in the movie “King Kong 2″
The Kong: Skull Island is thirsty for the wild and spectacular scenery to be filmed fantastically about the wild life of the King Kong, and luckily, Vietnam has it. In particular, Ninh Binh owns the highlights of Vang Long Westland, Trang An Scenic Landscape Complex, and Tam Coc – Bich Dong that are expected to present on the Hollywood big screen.

The Vang Long Westland works as the nature conservation area, which is primitive, quiet, and picturesque. It attracts the nature lover’s appreciation at first sight to stay closest to nature, in which the King Kong can survive. Then, the Hollywood film crew pays attention to the renowned Trang An Scenic Landscape Complex that is believed to be the best attraction in Ninh Binh; of course, this site is perfect for eco-sense. Also, the complex of Tam Coc – Bich Dong offers the pristine caves with stalagmites and stalactites for filming in a Hollywood style.

Quang Binh and the King Kong 2

Quang Binh in the movie “King Kong 2″
For the “Skull Island” landscape, Quang Binh meets the standard. The untouched and captivating scenery in Phong Nha – Ke Bang National Park, including Son Doong Cave (the biggest cave discovered by mankind), is worth capturing indeed. Along with that, the Rao Nan River and Yen Phu Lake are outstanding thanks to their scenic and clean ambiance for capturing the actual wildlife. As you see, the best cave, river, and lake in Quang Binh have been picked up to make the Kong: Skull Island film more appealing to catch the moviegoers’ eyes all over the world.

Halong Bay and the King Kong 2

Halong Bay in the movie “King Kong 2″
Halong Bay has the unique emerald water and thousands of the limestone islands, beaches, and caves to impress every audience. Filming the extraordinary charm of the “Bay of the Descending Dragon” in a Hollywood style is expected to wow the whole world; everybody is eager for it. The longing King Kong 2 film will more appeal to the moviegoers once they know that some of the scenes are captured in one of the most beautiful Bay of the world: Halong Bay. Believe it or not, Halong Bay will hold the indispensable role in this Hollywood film, and you will soon agree with us that the fairy Bay is impeccably wonderful in the King Kong 2.

Let’s wait for the newest installment of the King Kong franchise and check if you will be able to sort out the scenes filmed in Vietnam. 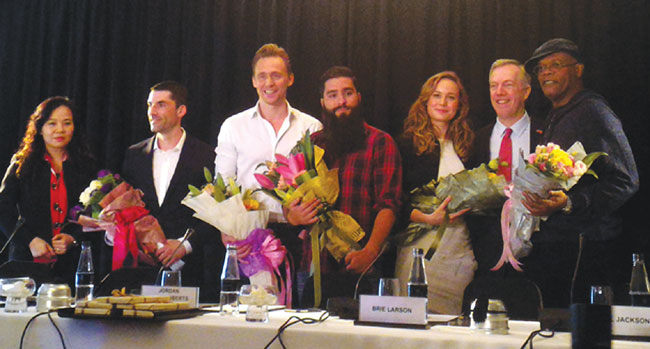